In their final-round debuts at the U.S. Nationals, California rivals Lombardo Jr., from Brea, Orange County and Gordon from Paso Robles, it was Lombardo who accelerated away first, pulling ahead to claim the Top Alcohol Funny Car national event trophy. He recorded 5.485 seconds at 269.08 mph while Gordon, hampered by mechanical concerns registered a runner-up pass of 5.715 seconds at 262.64 mph.

The weekend was distinguished on several accounts. “On Sunday night,” said Lombardo, “we surprised ourselves when we logged a 5.40 in demanding conditions. None of us had expected it but it was a pleasure to pilot.” Overall, it had been one of the tougher weekends for the team. “Car owner and crew chief, Rick Jackson, showed his commitment to the program,” added Lombardo. “He gave it everything all weekend and race day came to us. It was really special.”

For Jackson and several of his crewmembers, it was their second Indy win; their first occurred when Von Smith won in 2008. 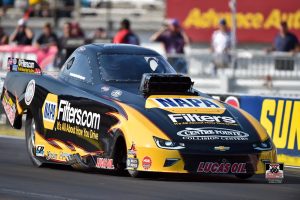 The JHE connection
Jackson Lombardo Racing was formed in 2014 when two successful Southern California-based Top Alcohol Funny Car teams led by driver John Lombardo Jr. and owner/crew chief Rick Jackson combined resources. They employ JHE for technical advice. “Joe’s a very knowledgeable and competitive individual,” remarks Jackson.” “Well-versed on every function of the internal combustion racing engine, it’s in his diversity where he shines: his talent is not just related to a specific class.”

Earlier this season, Force had delivered seven consecutive elimination passes quicker than 4.5 seconds, averaging 3.934 seconds. These performances followed an erratic stretch where the 16-time champion was succeeding only in completing track passes under power about 50 percent of the time. He had hoped to turn the corner before Indy.

During the past two years, JFR crew chief Jimmy Prock has been collaborating Joe Hornick Enterprises, mostly in the development of valve gear.