FUNNY CAR FINAL, Charlotte, NC: Robert Hight (2nd from left) celebrated his 40th career win when he defeated his John Force Racing teammate Courtney Force with a 3.943-second pass. His 0.019sec reaction time significantly contributed to his win. His rival, Force managed only a 3.98 pass after running a 3.957 in the semifinals. Driving his Auto Club of Southern California Chevrolet Camaro SS, this win gives Hight a 44-point lead in the NHRA Mello Yello Drag Racing series.

Hight currently holds the national elapsed time record at 3.793 seconds at a speed of 339.87mph. His most pressing dream is to be the first to reach 340mph. 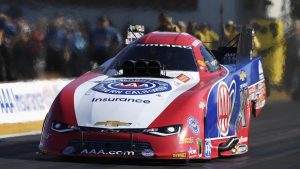 “I look forward to it,” said Hight, “because I know that elusive 340mph run is within our grasp. I know we can achieve it. We’ve already approached it in the first part of a run, and in different parts of the second half of a run. If we can put them together under the right conditions, we’ll capture it.”

So far in his 299 races, Hight has achieved 40 victories, 62 final-round appearances and 54 No. 1 qualifiers and won the 2009 NHRA Funny Car championship.