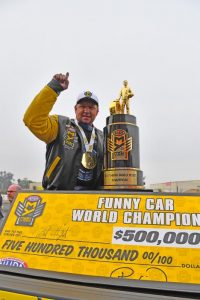 POMONA, Calif. (Nov. 11, 2017) – Robert Hight ran the gamut of emotions during the course of this past weekend's Auto Club NHRA Finals at Auto Club Raceway in Pomona. In the end, it was an almost overwhelming sense of elation that prevailed when he captured the 2017 Funny Car National Championship, the second of his career.

Advance Auto Parts driver Courtney Force finished the 2017 season with a career-best third-place points finish, racing to the semifinals on Sunday – her fourth semifinal in the six "Countdown to the Championship" races.

John Force, driving the PEAK Coolant & Motor Oil Chevrolet Camaro SS, also made history by racing in the team’s 4,000th Funny Car elimination round, beating J.R. Todd in the opening round before failing in the quarterfinals. He finished seventh in the Funny Car standings.