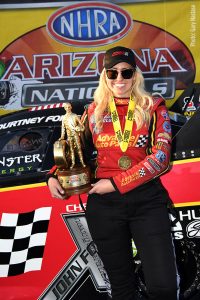 In the final round, she ran 3.834 seconds at 337.16 mph in her Advance Auto Parts Chevy Camaro to defeat Tommy Johnson Jr. To date, she has achieved eight previous wins and fifteen runner-ups. Tommy Johnson Jr., by comparison, has seventeen prior wins, with two in Top Fuel. He has recorded twenty-eight runner-ups, with 3 in Top Fuel. Force is 9 - 7 against Johnson Jr. This was the first time they have raced each other in a final round. Johnson seized a starting line advantage, but immediately experienced traction troubles.

In her battles to the finals, Ms. Force won against two-time national champion Del Worsham before racing Matt Hagan. She would have raced her father in the semi-finals had he not been eliminated by an accident. Consequently, she completed a solo run. Courtney's victory in Phoenix elevates her to second in point’s behind Matt Hagan.

Two-time and reigning Funny Car champion Robert Hight, lost in the first round to Tommy Johnson Jr. after the pair both pedaled to the finish-line. Hight’s 4.806 pass at 273.44 was surpassed by Johnson Junior’s 4.715 seconds at 225.60mph.

“Track temperature was in the 90s,” Hight explained. “We’ve run 3.79 in these conditions previously, and we anticipated running a low 3.80 to win. Clearly, we didn’t make sufficient changes based on what we saw—cars not making it down the track. If we had approached the run with 3.95 in mind, we probably could have navigated it. We’ll test tomorrow with some new stuff that, hopefully, we’ll have on our car at Gainesville and get ‘em there.”