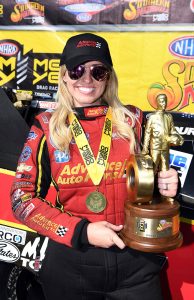 Commerce, GA, 4 May 2018: On Sunday’s final round of the Nitro Funny Car race at the 38th annual NHRA Southern Nationals, Matt Hagan left the starting line first and remained in front until the 330ft mark when Force drove past, accelerating to the win. The previous day, she won the battle for fastest qualifier.

“We had a great race car all day long,” she said. “Every single guy on my crew has done a phenomenal job—from getting the No. 1 qualifying spot yesterday in our final qualifying run to adding several more consistent prizewinning runs today. It’s also a thrill to win at the track where my sister [Ashley Force-Hood] got her first win. We’re excited.”

During Friday’s qualifying, reigning national Funny Car champion Robert Hight powered his Auto Club of Southern California Chevrolet to provisional No. 1. He ascended the rankings by recording a 3.952sec pass at 327.59mph in the second qualifying session. His first of four qualifying attempts had been convincing but was subject to an early shutoff.

“Leaving the pits, Jimmy Prock usually gives me an idea as to how the car will run,” explained Hight. “But we changed so many things, which we normally don’t do unless we‘re testing. To begin with, this year’s clutch pack had raised several questions. It has been too aggressive, so we decided to bite the bullet here in Georgia and make several decisive changes. Therefore, it was difficult to judge how it was going to run. In the end, I was pretty impressed because we got it to work in the left lane, and if you consider all the other competitive runs, they were achieved in the right lane. The left lane is a little trickier. So, we were pleased to reach Friday’s No. 1 spot.”