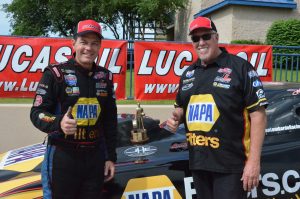 Based in Mooresville, North Carolina, Joe Hornick Enterprises (JHE) is one of the foremost specialist companies in the field of race engine research and development.

From professional and Sportsman drag racing classes to NASCAR and from short-track ovals, both dirt and asphalt, to pulling trucks and tractors, JHE commits its full capability to one team per category.

Top Alcohol Dragster specialist, Norm Grimes says, “JHE does not sell parts to competing teams—although they could. Instead they direct their energies to facilitate one team per class and avoid conflicts.”

Top Alcohol Funny Car team owner, Rick Jackson adds, “Confidentiality is imperative to me. Our racing capital is embedded in the quality of our engineering—it’s our competitive advantage and it must be guarded closely. JHE has created much of our advantage. They also know how to keep secrets.”

Joe Hornick was born and raised in Madison, Minnesota. He moved to Mooresville, NC, where he spent ten years working with NASCAR specialists Joe Gibbs Racing. His research and development prowess contributed to the team securing three fabulous national titles.

At the end of 2002, he switched to NHRA Pro Stock and led KB Racing to four consecutive national championships: 2003, '04, '05, and '06. For the following two seasons, 2007 and '08, he joined Cagnazzi Racing where he delivered a further two Pro Stock championships to Jeg Coughlin.

So far, in every category of racing in which Hornick has participated, championship victories have followed, including his contribution to Robert Hight's 2017 NHRA Funny Car national title.

Formed in 2012, Joe Hornick Enterprises is the stamp of innovation that enables each race team to prosper.

Nothing stimulates the ambitions of racers to do better than race wins and championship titles. George Bryce, the technically gifted and long-standing NHRA Pro Stock bike tuner recently said, “Joe Hornick brings a massive transfusion of talent to the entire racing scene. His success in race engine development shows the power of an ungovernable curiosity.”

Richie Gilmor of Earnhardt Childress Racing says that JHE helps his NASCAR team with extensive valve train development. “The advantage Joe Hornick brings us derives from his broader horizons,” he explains. It’s this broad knowledge that permits a man like Hornick to leap from one field of specialization to another.”